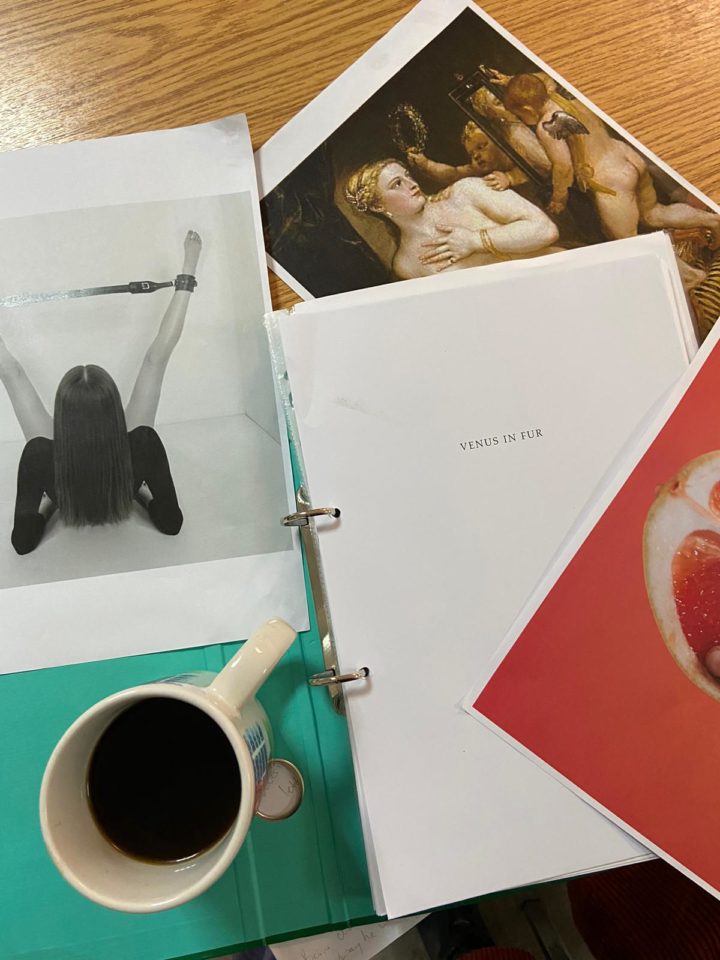 We are coming to the end of SEEDS 9, when SEEDS participants Olivia Songer, Naomi Faughnan, John Gunning and Ciara Elizabeth Smyth will present their showcase in Project Arts Centre. This will be the culmination of Rough Magic’s most recent 2 year artist development programme.

The Showcase’s centrepiece will be Venus in Fur by David Ives. This darkly comic play premiered off-Broadway at the Classic Stage Company in 2010 and on Broadway in 2011.

The SEEDS production will star Peter Coonan as Thomas Novachek, the writer/director of a new play opening in New York City, and Sarah Morris as Vanda Jordan, an aspiring actress who comes in massively late and surprisingly over-prepared.

“In the rehearsal room the we are wrestling with a wide range of power dynamics found in relationships and what happens when a particular dynamic is subverted” says SEEDS director Olivia Songer. “What has to happen for the dominant partner to become the submissive partner? Can relationships exist where both parties are truly equal? This play contends with the idea that everyone holds both dominant and submissive tendencies inside us. Vanda brings out a side in Thomas that he didn’t even know existed, and similarly, Thomas sees something in Vanda that she isn’t always comfortable with. Beyond the individual characters of the director and the auditioning actor, we see both characters begin to embody the roles in the play that Thomas has written. This mechanism of David Ives’ writing allows the characters of Thomas and Vanda to explore aspects of themselves, and their relationship that they might have otherwise denied. We end up decidedly far away from where we begin and it has been an exhilarating process to try and determine exactly how far we can go. Between accent study, movement work and deepening our understanding of BDSM and kink culture we are very busy, but happy to be working with such clever, rich and interesting material.”

Accompanying Venus in Fur will be a reading of SEEDS Playwright Ciara Elizabeth Smyth’s Irishtown; it is a week before the opening of a new Irish play on Broadway. In the rehearsal room, the cast are panicking. The writer’s previous play was a smash hit drama set in Northern Ireland during the Troubles. She’s been commissioned off the back of it and the producers expect another instant classic. Except her new play is about sexual harassment and seagulls. The cast are worried the script is dated, too weird and nowhere near Irish enough for American audiences. When the writer comes in to the rehearsal room to watch a run, an argument erupts and the fate of the script hangs in the balance. Not wanting to blow their shot on Broadway, the cast feel it is now their duty to devise an Irish Play.

Irishtown is a biting satire about theatre, consent and what it means to be Irish.