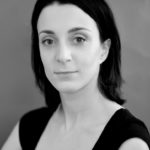 Maeve is a graduate of the Bachelor in Acting Studies at the Samuel Beckett Centre, Trinity College.

Film and TV includes Jim Sheridan’s ‘The Secret Scripture’ and ‘Corp Agus Anam’, ‘Rasai na Gaillimhe 2’ and ‘An Crisis’ for TG4. Radio includes ‘The Games Room’ and ‘The Book On One’ (RTÉ).