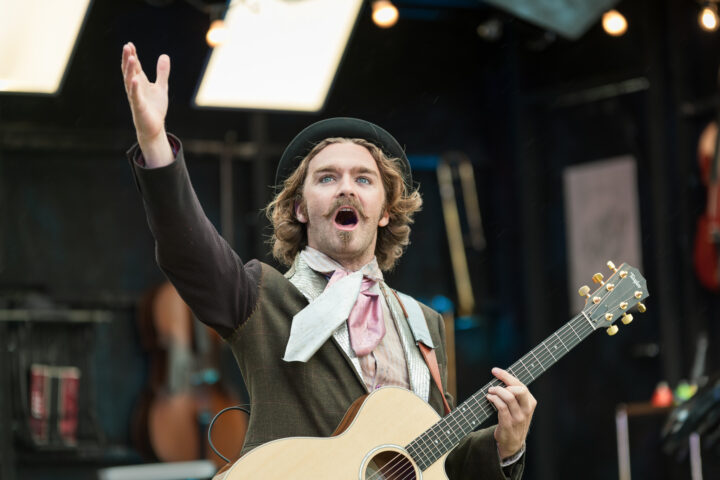 Ahead of Tonic’s opening night in Dublin Castle as part of Dublin Fringe, writer-composer Fionn Foley explains why he wanted to write a musical about the end of the world, how Tonic compares to his last Fringe musical Fierce Notions, and his advice for other actor-musicians.

Tonic is set in a post-apocalyptic world, among a society trying to recover after a catastrophic global event. Of course we have to ask, what was your inspiration?!

I was in Edinburgh with Brendan Galileo for Europe and I think I must have seen a music video or something on TV with a re-creation of a medicine show performance from the 1800s. A wide-eyed, gesticulating charlatan peddling some miracle elixir, a po-faced hurdy gurdy player accompanying the pitch on top of an ornately designed wagon acting as a stage for the presentation. I think it more or less immediately registered with me as something that would be a lot of fun to reimagine as a musical.

Shortly after of course, the world changed completely and the prospect of even thinking about making work for the near future was a non-starter. That is, until I started thinking about the show in terms of being something that was made to weather the storm of the present moment, a literal travelling show that could bring all the spectacle and dynamic of a musical around in a box as an outdoor experience. That was when it started to make sense.

The idea of a musical comedy about the end of the world made me laugh. In particular, the ways in which society might try and cling to any sense of normality or familiarity. In Tonic, that’s represented by the Calibri Triplet Family Band, who have just launched their first post-apocalyptic tour. It was kind of a fascinating process in that the parallels and significance of the show in relation to what’s been happening in the world have constantly evolved and changed, which in turn has influenced the kind of piece it’s become.

Why make Tonic a musical?

What really appealed to me about the medicine show charlatans and snake oil salesmen was their ability to make performance and spectacle a tool of sedition and manipulation. Music was the greatest catalyst of persuasion within these shows. So the challenge of trying to create a perfectly crafted ‘sales pitch’ for a life-altering tonic in the form of an almost Vaudevillian music revue was something that really excited me. In Tonic, music is weaponised. The noble and enduring legacy of folk is pitted against the chaotic idealism of punk. The Calibri Triplet Family Band’s sound itself has been warped into everything from deranged psychedelica to frenzied commercial jingles. So, it’s a story not only told through music, but defined by it.

The last musical you wrote for Dublin Fringe, which Juliette also performed in, was Fierce Notions. Are there any similarities with Tonic?

Certainly, to some degree. Though I would hate to think I was following a formula for each project, I do think I have an enduring interest in pairing darkly pertinent themes (in the case of Fierce Notions, the rise of malevolent populism in a fictional ‘Hibernia’ and Ireland’s own history of tribalism within the halls of power) with really, truly ridiculous premises. If I can describe the thrust of a show to someone in one sentence and make them laugh, or wince in exasperation, then I generally know I’m into it. As well as that, both shows consist of music played almost exclusively live by the performers – which is something I love as a form, despite it sometimes bringing actors (actors he says- me, I mean) to the brink of sanity. But it comes more than naturally to both Aoife and Juliette who really are astonishing in their juggling of the music/singing/acting trifecta of doom.

I was listening to Stewart Lee talk about his work recently, where he said that even if people aren’t into it, or actively dislike it, he would want his audience to feel as though they just watched a show in which someone left absolutely everything, mentally and physically, on stage. Without wanting to sound sadistic, I probably do take some satisfaction in making shows that end with an utterly spent, sweat-drenched ensemble (or in the case of my solo show Brendan Galileo for Europe, just one sweaty man) expending their last bout of energy on a final bow.

How was the rehearsal process?

I could talk about how surreal and alien it felt in terms of COVID-restrictions and the uncertainty of the present moment. But in reality when I look back on the process of making this show, it’s been five weeks of laughing. At everything and everyone.  I’ve never laughed as much, really. And I hope that audiences can feel that within the show, which ultimately is about finding your last morsel of perseverance in the face of complete oblivion. It’s the only way to make work as far as I’m concerned- with a spirit of humour and collaboration even when things are challenging. I had the privilege of being surrounded by a cast and crew that completely embody that idea. To my knowledge, Rough Magic don’t have an official motto per se, but if they did I feel it would be something that pays homage to the art of finding sophistication in silliness and profundity in play.

What do you think audiences will enjoy most about the show?

I’m hoping the show has the Ronseal effect- a tonic in every sense. I do hope audiences will feel that this show scratches an itch that has been just out of reach for the last year or so. It lures you in with a folk-drive charm offensive of medicine show theatrics, but takes many a sharp turn along the way and never quite allows you to relax. As well as that I can say that the performances of my two co-stars Juliette Crosbie and Aoife Kelly are outrageously impressive as anyone familiar with their work will already have assumed. I suppose most of all I hope that audiences come away from the show uplifted, not in the sense of having enjoyed an hour of escapism. Rather the opposite, that they have looked into the void and felt some sense of hope. Or better still, laughed at it.

You are associated artist of Solstice Arts Centre, one of the ITI’s Six in the Attic participants, and before that you were an artist-in-residence at Dublin Fringe. How important have these residencies and supports been for your career?

They’re great. First and foremost, they mean I don’t have to write any more musicals in cafes. Which I have done a good bit of, and it’s as difficult as it sounds. Also, to have the support of individuals or organisations in the industry is a massive help – whether it be the encouragement to submit a script somewhere or the money or resources to actually get something off the ground. It’s something that really adrenalises things and motivates you to make better work.

Any advice for emerging artists who want to both write, compose and perform their own work?

As I’ve mentioned, I find the actor-musician musical form really exciting and kind of in its infancy potential-wise, certainly in Ireland anyway. So I’d love to see more people writing for music-based theatre. There’s no way around it, juggling a few big roles within one project can be quite an overwhelming workload, no matter how prepared you are (or perhaps think you are). You definitely start to see that there are a few good reasons why people chose not to wear so many hats. But it’s also very rewarding to be part of the work at every stage and in different ways.

I’m not really one for giving advice, except to maybe say be mindful of who you take advice from. One thing I could categorically say has made a difference to me is work. I think it’s easy for artists to become distracted from their craft by having to talk about it, publicise it, worry over it, compare it with that of others. I would say work as hard as you can. And then work harder again. Everything thing else is basically chance.