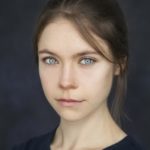 ​She will be back on stage this Summer in the role of Hero in Rough Magic’s production of MUCH ADO ABOUT NOTHING directed by Ronan Phelan for Kilkenny Arts Festival.

​Recent stage credits include the role of Zoe in ASKING FOR IT, the Landmark stage production of Louise O’Neill’s acclaimed novel, adapted by Meadhbh McHugh and directed by Annabelle Comyn. The excellently reviewed production played on The Abbey Theatre stage and at The Everyman Theatre, Cork, WOMB for Outlandish Theatre Platform at the Samuel Beckett Theatre,  KISS KISS SLAP SLAP for Chaos Factory at Smock Alley, the national tour of Brokentalkers’ acclaimed THIS BEACH, and the role of Emmy in NORA, a version of Ibsen’s A DOLL’S HOUSE adapted by Belinda McKeon and Annie Ryan for the Corn Exchange.

Screen credits include the lead role in Oonagh Kearney’s experimental dance short, FIVE LETTERS TO A STRANGER WHO WILL DISSECT MY BRAIN, a collaboration with Junk Ensemble based on a poem by Doireann Ní Ghríofa and the role of Maggie in WISHBONE, directed by Myrid Carten.

​Venetia holds a Bachelor in Acting degree from The Lír Academy at Trinity College Dublin (in partnership with RADA).